The Secret To Creating An Irresistible Sales Deck 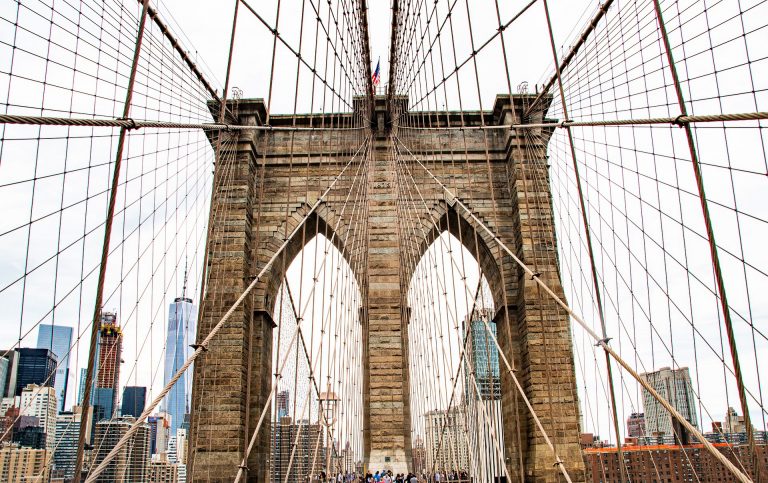 The Brooklyn Bridge has been called the Eighth Wonder of the World.

For 14 years, hundreds of workers toiled underwater and high above the East River to build it.

Its massive stone towers are supported by caissons, large wooden boxes positioned at the bottom of the river bed.

During construction, the caissons were filled with compressed air to keep out water while workers dug their way to solid bedrock. Then they were packed with concrete, becoming an impermeable foundation for the bridge.

But the bridge’s success relies on more than firm footings.

It relies on heavy-duty spun wires. Due to their boundless strength, people could now travel above one of the busiest waterways in the world by foot, horse-drawn carriage, or railway.

And for the first time, the independent cities of Brooklyn and New York (now Manhattan) had a strong connection.

Similarly, your sales deck needs to build a strong connection with your prospect.

A successful sales deck forges a powerful connection by telling a story.

You can create a masterful story in the opening section of your sales deck with a simple three-step formula.

Let’s look at how this formula works to win sales.

The ‘before, bridge, after’ story reminds prospects why they liked your product at the outset. Then it gets them into a buying frame of mind.

When writing the before section of your sales deck, highlight the challenge your prospect is facing. Identify the biggest pain point and agitate it.

In its sales copy, Nolah Mattress targets a specific demographic while highlighting the challenge of getting a good night’s sleep.

...Explicitly made for side, combo, and back sleepers...compared to Memory Foam that feels hard on hips and shoulders...

The before section is also the perfect place to highlight an obstacle.

Lighting Company SORAA talks about the problems parents face in getting a child to sleep.

...Creating an effective nighttime routine for your child can be one of the most difficult aspects of parenting...

SORAA then targets the consequences of NOT overcoming the challenge.

...This [harsh lighting] can throw off your child's natural circadian rhythm and make it more difficult for them to fall asleep...

So talk about a problem. Highlight the obstacle(s) of overcoming that problem. And don’t forget to emphasize the risks of ignoring it.

What is your product or service, and what’s so great about it? Align your biggest benefit with your prospect’s wants, needs and desires.

Here are a few examples.

No one enjoys shopping for insurance. Lemonade is known for flat fees, low prices, paying claims immediately, and donating leftover money to nonprofits.

They make it crystal clear why you should at least check out their insurance plans:

"Forget Everything You Know About Insurance"

Online eyeglass retailer Warby Parker came up with an ingenious way to overcome customer hesitation – virtual try-on. The company allows you to try out your five styles for five days. And the offer includes free shipping.

"Try On 5 Frames Without Leaving Home"

The North Face is an outdoor recreation products company founded by two hiking enthusiasts. They believe in helping their customers test the boundaries of possibility.

The company name refers to the most challenging side of the mountain. And their trademarked mantra is:

See how these companies communicate their over-arching benefit in a few words?

When it comes to sales decks, less is truly more. Keep text to a minimum. This allows the salesperson to elaborate, leaving plenty of opportunity for questions from the prospect.

The after section of your sales deck should focus on what your prospect will be able to do, solve or achieve.

Once they implement your solution, what will their life be like? What problems and concerns will be reduced or eliminated?

Chownow provides online ordering and marketing services to restaurants for a monthly fee – without the commissions charged by third party delivery apps.

So it’s profitable for restaurants as well as diners looking for good local takeout.

...Our takeout just went through the roof because we could be taking five orders at a time, instead of just one order at a time.

Secure and affordable ifax is a popular faxing app. It allows you to send and receive documents online via fax – without using a fax machine. You can even sync your fax records and numbers online from any device.

An ifax customer who’s a hospital physician sums up his after state this way:

..My work-life is now a paperless reality...

Here are a few examples from learners describing their after effects.

Coding made me an asset. I feel super confident in my job because there are things I bring to the table...

That just opened the tap of dopamine in my brain...

...I would 100% be nowhere without the people and friendships I've walked away with by being part of this world...

When writing your after section, think about every aspect of your prospect’s life. How will your product or service make it better?

Zero in on what’s most meaningful to them.

A Final Tip for Creating a Powerful Sales Deck

Crafting a compelling sales deck requires empathizing with your prospect. When you connect what you do to their desires, something wonderful happens.

A special bond. A solid bond. A bond that serves as a mighty foundation for a worthwhile relationship.

And if you get stuck, just think about the Brooklyn Bridge.

Back in 1925, it inspired poet Vladimir Mayakovsky to pen a famous poem entitled – yes, Brooklyn Bridge.

on cables of string

to the feet of the stars.”

Ready to create a sales deck that builds a strong connection to your prospects? Let’s talk. You can get in touch with me here.